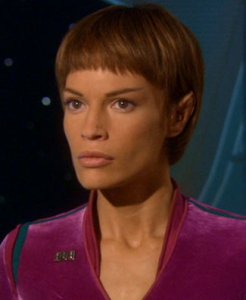 T’Pol (/tɪˈpɒl/) is a fictional character in the Star Trek franchise. Portrayed by Jolene Blalock in the series Star Trek: Enterprise, she is a Vulcan who serves as the science officer aboard the starship Enterprise (NX-01).

According to producer Rick Berman, it was originally intended that a younger version of T’Pau would be the Vulcan officer serving on the titular starship in Star Trek: Enterprise. Instead, after determining there were legal difficulties in using the original series character, the producers created T’Pol.[1]

Blalock turned down the role three times before accepting. The costume and makeup, including ears and wig, took about two hours to apply. Blalock found it helped her get into character “It’s really cool. Once I’m in the outfit, I am T’Pol.” She describes the character as “feline in movement” and says “she does not look at humans condescendingly, though she is a superior race, so it may seem that way. She’s just learning about human nature and the positives of feeling emotion.”[2]

According to John Billingsly , Blalock was very method in her approach to T’Pol, and she redecorated her trailer so that she was surrounded by beautiful space images.[3]

T’Pol is the first Vulcan officer to serve a prolonged term on a human vessel. T’Pol served aboard the Enterprise for 10 years (2151–2161). To compare, the previous record was just 10 days. As a subcommander serving the Vulcan High Command, she was stationed aboard the Enterprise in April 2151, as an observer to Captain Jonathan Archer and his crew, who the High Command insisted were not ready for interstellar space exploration. After the success of the Enterprise‘s initial mission led to the vessel being given an extended exploration mandate, T’Pol requested to stay aboard.

T’Pol remained aboard the Enterprise despite several attempts by her superiors to recall her to Vulcan. T’Pol’s decision brought considerable scrutiny upon her from her superiors, and increasing support for her from her captain; she ultimately resigned from the High Command and accepted a field commission from Starfleet in 2154, resulting in her being granted the Starfleet rank of Commander.

Originally viewed by her crew mates with resentment and suspicion, T’Pol was forced to earn the trust of fellow officers, Commander Charles “Trip” Tucker III being a particular focus of friction with her, due to his perception of her being a spy for the Vulcans and their very different personalities.

T’Pol is more emotional than many other Vulcans and has always struggled to control her emotions, something that greatly concerned her mother. Her emotions became even more difficult to control following an exposure to trellium ore, a toxic substance which damaged the part of her brain responsible for emotional control. Nonetheless, T’Pol serves as an icon of Vulcan integrity. Her willingness to question the decisions of her superiors, and her respect for Captain Archer position her at the fulcrum of human/Vulcan relations.

In Season 3, episode 24 “Zero Hour“, while talking with Trip on February 14, 2154,[4] T’Pol states that she “will only be 66 years old” on her next birthday. This places her birth in 2088 or 2089 (as measured on Earth), making her 62 or 63 years old at “Broken Bow“.[5] T’Pol was born the only child of T’Les, an instructor at the Vulcan Science Academy, and her (never named) husband. Per Vulcan tradition, T’Pol was bonded with a Vulcan named Koss while they were children and expected to marry as adults (“Breaking the Ice“).

As a child, T’Pol’s path in life was inspired by Ambassador V’Lar whom she watched negotiating with the Andorians during the Treaty of 2097 over possession of the planetoid Paan Mokar (“Fallen Hero“).

Approximately 16 years before joining the crew of the Enterprise, T’Pol served as an agent for the Vulcan intelligence service. At age 47, she completed her training for the Vulcan Ministry of Security. During an early mission to apprehend a pair of Vulcan criminals, she was forced to shoot and kill one of the fleeing men. She resigned from the service as a result, and the guilt over killing someone face-to-face caused her to suffer a nervous breakdown or emotional collapse which led to her undergoing a procedure, the Fullara, that erased all memory of the incident. This “memory cap” disappeared when she was briefly reactivated as an agent during 2152 in order to capture the criminal Vulcan who eluded her that day, and she experienced another emotional collapse which was alleviated by the support of Captain Archer. Given the option to once again suppress her memory of killing, she chose to live with it instead (“The Seventh“).

While in the Ministry of Security, T’Pol was also involved in mission operations at Tomed near Romulan space. Serving under her was Major Talok. However, unbeknownst to T’Pol, Talok was a Romulan spy disguised as a Vulcan working in league with corrupt Administrator V’Las of the Vulcan High Command. Their goal was to promote the eventual conquest of Vulcan by the Romulan Star Empire (“Kir’Shara“).

After her resignation from the Ministry of Security, T’Pol served for over a year as the deputy science officer aboard the Vulcan cruiser Seleya, under the command of Captain Voris (“Impulse“).

In 2149, T’Pol began her tenure at the High Command’s Consulate on Earth, assisting Ambassador Soval in his observation of humanity’s progress toward space exploration (“Fusion“). In 2151, then holding the rank of sub-commander, she was selected by Soval to accompany Captain Jonathan Archer during his initial first mission aboard the Enterprise NX-01 as observer and Vulcan representative. When the mission was successful and the Enterprise greenlighted to continue its mission of exploration, T’Pol elected to remain on board as science officer (“Broken Bow”).